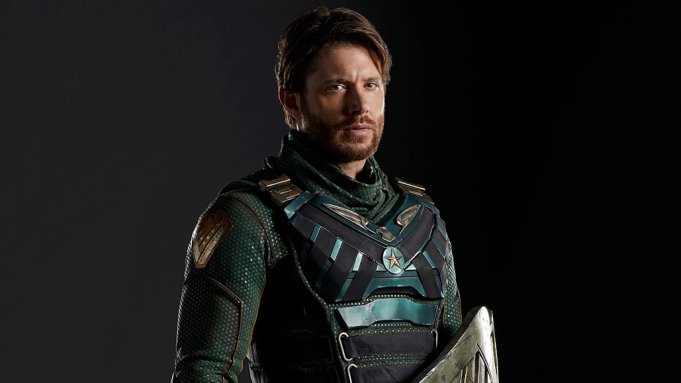 Amazon Prime Video has released the first look of Jensen Ackles as Soldier Boy, who seems to be a big character in the upcoming season of Prime Video’s hit series The Boys.

In an interview with Variety, Laura Jean Shannon said this about the Soldier Boy suit:

“Our goal was to highlight a bygone era of overt masculinity and grit. With that pedigree we dove headfirst into baking in an all-American quality grounded in a military soldier’s practicality with a heavy dose of old school cowboy swagger, We knew that the actor had to have Steve McQueen looks and chops with a John Wayne attitude — luckily Jensen Ackles embodies all of that.”

Jensen Ackles will play the original superhero in The Boys universe, after fighting in World War II, Soldier Boy became the first super-powered celebrity and he is coming back in Season 3 which possibly means he is a big threat to Homelander. In comics, Soldier Boy was the leader of Payback (the second-strongest superhero team after The Seven), and Soldier Boy has always wanted to join The Seven.

According to Eric Kripke, he knew that Soldier Boy was a fan favorite and he kept that in mind while casting the character, he knew that Ackles was the perfect choice for Soldier Boy, because he had worked with him previously on the fantasy series Supernatural.

On the casting of Ackles, showrunner Kripke said this:

“When I cast Jensen as Soldier Boy, the first thing I said was, ‘I’m most excited for you, because of the amazing process you’ll go through with LJ, our Super Suit designer, It took six months but the experience surpassed Jensen’s expectations. L.J. has made a work of art that tips its hat to the WWII Soldier Boy from the comics, while taking it in a sleek new direction. And if you think the photos are cool, just wait till you see Jensen in action. It’s one of my very favorite suits. Also, now you can quit clogging my Twitter notifications with demands to see it.”

The Boys Season 3 will add some new characters in the series like Little Nina who will be played by Katia Winter alongside Ackles who will play the aforementioned Soldier Boy. Almost all of the main characters are expected to return like Billy Butcher (Karl Urban), Hughie (Jack Quaid), Homelander (Antony Starr), Starlight (Erin Moriarty), and many more.

Are you excited about The Boys Season 3?