The scene which was revealed on Twitter, shows Lloyd coming out of a portal and Martell coming after him. Then Lloyd says “Morty, we’re home,” belching in the middle of the sentence and doing the best impression of drunk Rick.

Adult Swim posted the scene with the caption “C-132,” which is the designation of the Oni Press’s Rick and Morty comics’ first two volumes. The live-action clip is also more interesting because it shows one of the differences between the animated series and the comics in which Rick-132 doesn’t like to time travel that much in the comics.

Rick and Morty Season 5 has ten episodes in total, and they are a part of the 70 episode order given by Adult Swim after they renewed the acclaimed series in 2018. Season 5 debuted on Adult Swim on June 20, with the weekly release of episodes every Sunday. But the creators are making fans wait for the season finale which is coming out on September 5 after taking a break on August 8.

Check out the clip of the live-action promo: 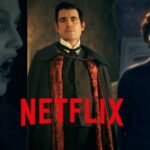