Hulu has just revealed a teaser for their upcoming animated Marvel series, and it doesn’t disappoint. The series follows a Japanese snow Macaque with a penchant for murder as he teams up with a ghost of an assassin to take revenge on the people that slaughtered his family, with a political drama backdrop.

The series stars Jason Sudeikis (Ted Lasso) as Bryce, the ghost of the hitman and mentor to Monkey (Fred Tatasciore). According to an article from Marvel, Monkey and Bryce become inexplicably linked after someone kills Bryce in the Alps and Monkey’s tribe is also killed by the same people, therefore starting this revenge tale. Monkey is a powerful and brilliant killer with a problem with rage, and that’s why the sarcastic and cynical Bryce has to help him channel his abilities for good.

The series also stars George Takei (Star Trek) as Shinji, a good-natured politician, and his niece Akiko played by Olivia Munn (The Newsroom), as they are both thrown into the political spotlight following an unforeseen tragedy. Ally Maki and Nobi Nakanishi as Haruka and Ito, the police officers who are investigating the events surrounding Hit-Monkey to find out if he is good or evil.

The series is written and executive produced by Josh Gordon and Will Speck. Joe Quesada will also be serving as an executive producer on the series. The hit-Monkey comic was released in 2010 and it was created by Daniel Way and it was illustrated by Dalibor Talajić. The whole first season of the series will available to stream on Hulu on November 17. Check out the teaser by Hulu: 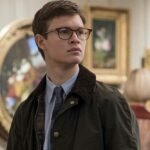