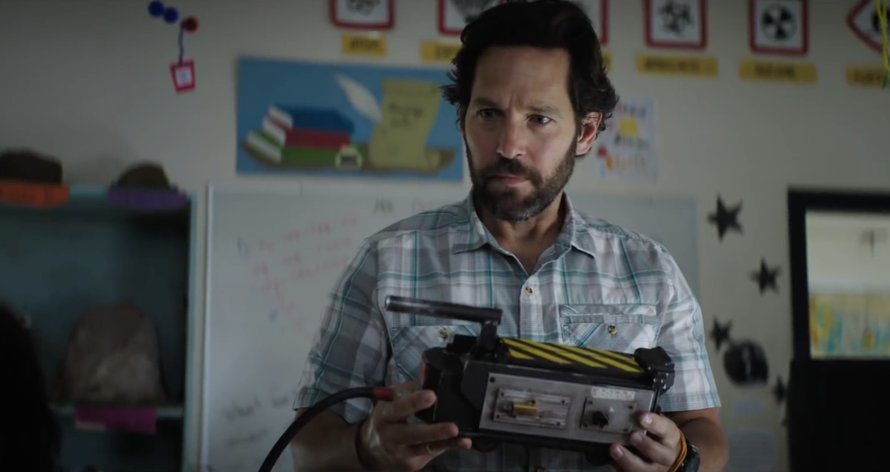 Ghostbusters: Afterlife is finally coming to theaters this fall after a series of delays due to the COVID-19 pandemic, and to promote the film and get the fans excited, Columbia Pictures just shared two new posters featuring a newly refurbished Ecto-1 and the kids who are putting everything on the line to save the world.

The first poster features the iconic Ghostbusters logo, and it also highlights Paul Rudd (Ant-Man), Finn Wolfhard (Stranger Things), while Mckenna Grace, Logan Kim, and Celeste O’Connor stand around the Ghostbusters rusted car in the middle of a cornfield, as a blue-green storm brews above them.

The second poster features the destruction that has come upon the small Midwestern town, while the group stand with their backs turned but in this poster, we get a look at the refurbished Ecto-1. In the poster, the group is looking up at the same blue-green storm that is now destroying the town with colorful lightning. This image is somewhat similar to the third act climax of the original Ghostbusters film.

Ghostbusters: Afterlife also stars Carrie Coon, and it sees the return of the original Ghostbusters including Bill Murray, Dan Akroyd, Ernie Hudson, and Sigourney Weaver. The film is directed by Jason Reitman with a script he co-wrote with Gil Kenan.

Ghostbusters: Afterlife is hitting theaters on November 19, 2021. Check out the new poster below: