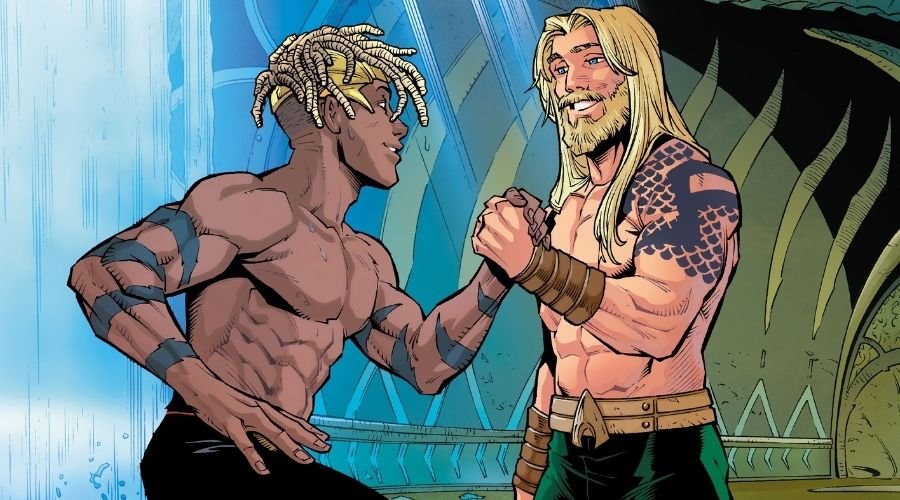 DC Associate Editor Andrea Shea teased an upcoming Aquaman comic book titled ‘Aquamen‘, with the official logo, and that it’s coming in 2022. Shea wrote in a tweet that she “Just had an invigorating call in which [Brandon Thomas] laid out some killer long-term conflict and [Chuck Brown] introduced a new character motivation that came with such massive potential I was dancing in my chair at the thought. 2022 is gonna be the best.”

Every DC Comics fan knows that Arthur Curry is not the only Aquaman in the DC Universe anymore, with Jackson Hyde aka Aqualad ready to take up the mantle in the currently ongoing limited series Aquaman: The Becoming. Even with that information, there is not much known about the upcoming comic book beyond the involvement of Brandon Thomas and Chuck Brown, and that it will be released in 2022. The title indicates that it will feature more than one Aquaman from the universe of DC Comics.

While Thomas is known for writing Hardware, Aquaman/Green Arrow: Deep Target, and Aquaman: The Becoming, he is also currently working on the script for DC’s upcoming animated film based around the heroes of Milestone Comics. Brown is known for writing comics like Bitter Root, On the Stump, and the Aquaman spin-off titled Black Manta. There is no information on who the artist will be on the upcoming comic book. Check out the tweet below: