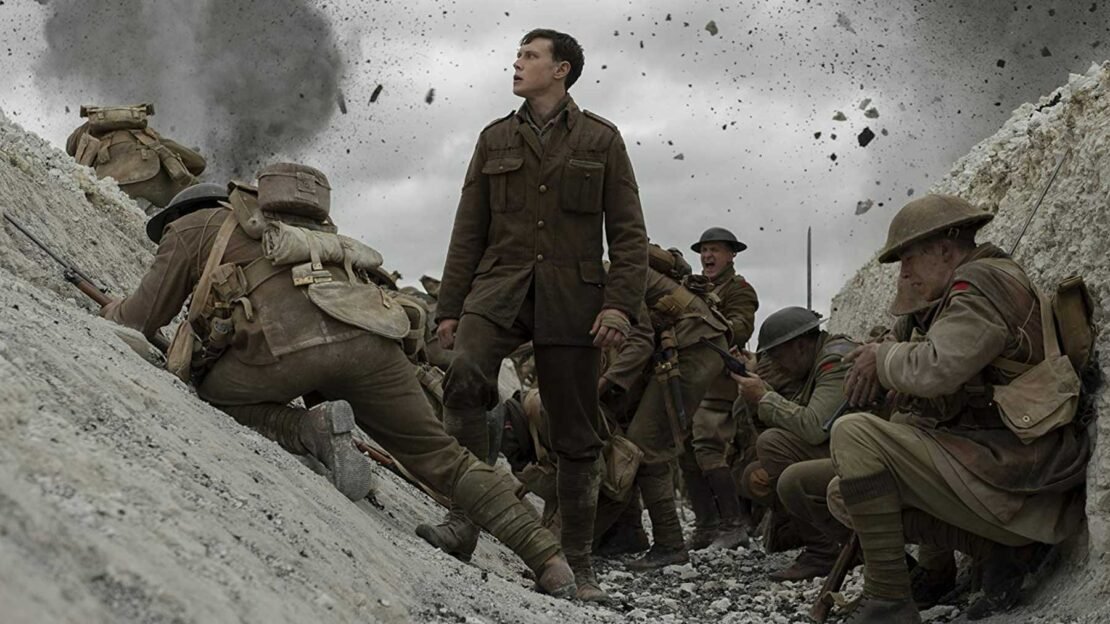 Even though we hate wars but at the same time, we are all fascinated by them. The anxiety, fear, and unpredictable nature of it. To scratch that itch we watch war movies and we at Cinemablind made a list of the top 10 war movies of this century. We added some movies based on true events as well as fictional ones. Movies like Saving Private Ryan (1998) will not be included because they were not released after the year 2000. We haven’t ranked these movies, we think they are all worth your time and you should watch them.

This Netflix film starred the late Chadwick Boseman and told the story of four African American soldiers who return to Vietnam to find their fallen squad leader (Chadwick Boseman) remains. The official Sypnosis of the movie is, “African-American Vets — Paul (Delroy Lindo), Otis (Clarke Peters), Eddie (Norm Lewis), and Melvin (Isiah Whitlock, Jr.) — who return to Vietnam. Searching for the remains of their fallen Squad Leader (Chadwick Boseman) and the promise of buried treasure, our heroes, joined by Paul’s concerned son (Jonathan Majors), battle forces of Man and Nature — while confronted by the lasting ravages of The Immorality of The Vietnam War.”

Dunkirk is created by the Internet’s god of cinema, Cristopher Nolen and it is set during World War II in a town, Dunkirk where a heavy battle is imminent with German forces and that’s soldiers from British Empire, Belgium, and France try to evacuate from there. Dunkirk follows multiple timelines and has a very impressive ensemble cast which includes Tom Hardy, Cillian Murphy, Harry Styles, and Fionn Whitehead.

1917 is one of the best movies ever shot. Sam Mendes the director shot 1917 in a long shot, so this movie is like a one two-hour-long shot. The official synopsis for the movie is, “At the height of the First World War, two young British soldiers, Schofield (Captain Fantastic’s George MacKay) and Blake (Game of Thrones’ Dean-Charles Chapman) are given a seemingly impossible mission. In a race against time, they must cross enemy territory and deliver a message that will stop a deadly attack on hundreds of soldiers—Blake’s own brother among them.”

Starring Brad Pitt, Shia LaBeouf, and Logan Lerman. Fury tells the story of a warlord and his team who embark on a mission to attack the Nazi army even though their chance of winning against them slim to none. Fury is all about heroism. The official synopsis for Fury is, “April 1945. As the Allies make their final push in the European Theatre, a battle-hardened army sergeant named Wardaddy (Brad Pitt) commands a Sherman tank and her five-man crew on a deadly mission behind enemy lines. Outnumbered and outgunned, Wardaddy and his men face overwhelming odds in their heroic attempts to strike at the heart of Nazi Germany.”

Pearl Harbor stars Ben Affleck and it’s directed by Michael Bay. Even though the critics didn’t love the movie, it has some visually magnificent sequences that make this movie worth it. The official synopsis for the movie is, “History comes alive in the unforgettable epic picture PEARL HARBOR, the spectacular blockbuster brought to the screen by Jerry Bruckheimer and Michael Bay. Astounding visual and audio effects put you at the center of the event that changed the world — that early Sunday morning in paradise when warplanes screamed across the peaceful skies of Pearl Harbor and jolted America into World War II. This real-life tale of catastrophic defeat, heroic victory, and personal courage focus on the war’s devastating impact on two daring young pilots, Ben Affleck and Josh Hartnett, and a beautiful, dedicated nurse, Kate Beckinsale. PEARL HARBOR is extraordinary moviemaking — a breathtaking reenactment of the “date which will live in infamy” and a heartfelt tribute to the men and women who lived it.”

Hacksaw Ridge is based on the true story of Desmond Doss who heroically saved many of his fellow soldiers single-handedly during World War II on Hacksaw Ridge. Starring Andrew Garfield, Hacksaw Ridge’s official synopsis is, “HACKSAW RIDGE is the extraordinary true story of Desmond Doss [Andrew Garfield] who, in Okinawa during the bloodiest battle of WWII, saved 75 men without firing or carrying a gun. He was the only American soldier in WWII to fight on the front lines without a weapon, as he believed that while the war was justified, killing was nevertheless wrong. As an army medic, he single-handedly evacuated the wounded from behind enemy lines, braved fire while tending to soldiers, and was wounded by a grenade and hit by snipers. Doss was the first conscientious objector awarded the Congressional Medal of Honor.”

Allied is set during World War II and it is as much as a romance movie as it is of war. Allied tells the story of two WWII operatives and it stars Brad Pitt Marion Cotillard. The official synopsis for Allied is, “ALLIED is the story of intelligence officer Max Vatan (Pitt), who in 1942 North Africa encounters French Resistance fighter Marianne Beausejour (Cotillard) on a deadly mission behind enemy lines. Reunited in London, their relationship is threatened by the extreme pressures of the war.”

The Imitation Game stars one of my favorite actor Benedict Cumberbatch. Even though The Imitation Game isn’t set in the war zone, it is still essential to the war. The official synopsis for The Imitation Game is, “Based on the real-life story of Alan Turing (played by Benedict Cumberbatch), who is credited with cracking the German Enigma code, THE IMITATION GAME portrays the nail-biting race against time by Turing and his brilliant team at Britain’s top-secret code-breaking center, Bletchley Park, during the darkest days of World War II. Turing, whose contributions and genius significantly shortened the war, saving thousands of lives, was the eventual victim of an unenlightened British Establishment, but his work and legacy live on.”

This Quentin Tarantino film stars Brad Pitt, Christoph Waltz, and Quentin Tarantino himself and tells the story some Jewish soldiers in an undercover mission to bring down Nazi Germany and a woman who wants revenge for her family. The official synopsis for this film is, “”Inglourious Basterds” (sic) begins in German-occupied France, where Shosanna Dreyfus (Mιlanie Laurent) witnesses the execution of her family at the hand of Nazi Colonel Hans Landa (Christoph Waltz). Shosanna narrowly escapes and flees to Paris, where she forges a new identity as the owner and operator of a cinema.

Elsewhere in Europe, Lieutenant Aldo Raine (Brad Pitt) organizes a group of Jewish soldiers to engage in targeted acts of retribution. Known to their enemy as “The Basterds,” Raine’s squad joins German actress and undercover agent Bridget Von Hammersmark (Diane Kruger) on a mission to take down the leaders of The Third Reich. Fates converge under a cinema marquee, where Shosanna is poised to carry out a revenge plan of her own…”

This Julius Avery film tells the story of experiments that happened during WWII. The official synopsis for Overlord is, “With only hours until D-Day, a team of American paratroopers (Wyatt Russell, Iain De Caestecker, Jovan Adepo, John Magaro) drop into Nazi-occupied France to carry out a mission that’s crucial to the invasion’s success. Tasked with destroying a radio transmitter atop a fortified church, the desperate soldiers join forces with a young French villager to penetrate the walls and take down the tower. But, in a mysterious Nazi lab beneath the church, the outnumbered G.I.s come face-to-face with enemies unlike any the world has ever seen. From producer J.J. Abrams, Overlord is a thrilling, pulse-pounding action adventure with a twist.