Even though the original David Lynch’s Twin Peaks series only ran for two seasons, it instantly became one of the most applauded series out there and the series is so brilliant that it is still talked about to this day despite it having been released in 1990 and then it was canceled in 1991, but Showtime brought the series back in 2017 for one more season which was loved worldwide. Twin Peaks is one of the first big murder mystery series that involved supernatural and occult elements in its story. So, if you miss the classic series here are 10 more shows you could watch that are somewhat similar to Twin Peaks.

Synopsis: A Secret Service agent travels to Wayward Pines, Idaho, in search of two federal agents who have gone missing. Instead of answers, Ethan’s investigation only turns up more questions and he soon learns that he may never get out of Wayward Pines alive.

Also Read: Best Shows Like ‘Under the Banner of Heaven’

Synopsis: The Dustbowl. In a time of sandstorms, plagues, drought and pestilence, the final conflict between good and evil is about to begin. This epic HBO series focuses on the battle as it plays out against a pair of unusual backdrops: a traveling carnival working the American Dustbowl circuit, and an evangelical ministry in California. 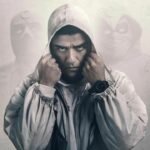