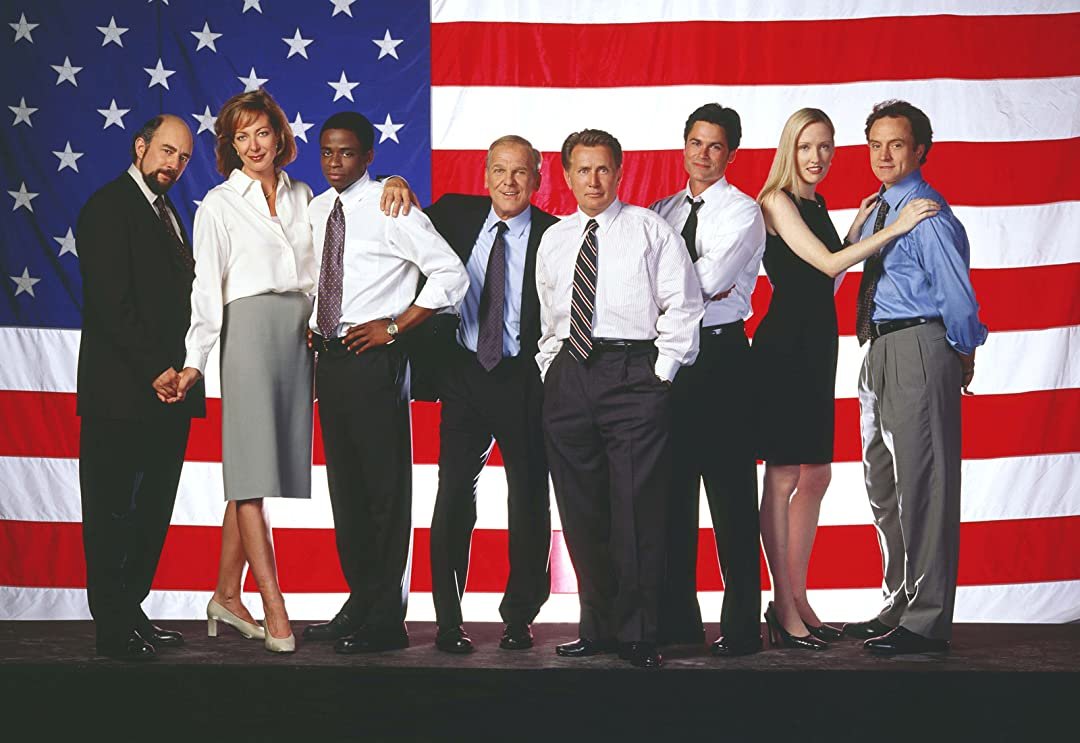 The West Wing is one of the best political shows ever made and one of the main reasons so many people love the series is that it shows the political environment that is not completely filled with malice and incompetent people instead it shows the leaders of the nation and the people helping him are working tirelessly to make a better America. The NBC series is quick-witted funny and religiously political while also being loved by the people sitting on the opposite sides of the political arena. The West Wing is also famous because of its brilliantly written script for which all of the credit goes to Aaron Sorkin who served as the creator of the series until he left the series after the end of Season 4, and while the series ran for three more seasons many people were not hugely impressed with the later seasons. The West Wing also had an incredible ensemble cast including Martin Sheen as Jed Bartlet, the President of America, Bradley Whitford as Josh Lyman, Allison Janney as C.J. Cregg, Richard Schiff as Toby Ziegler, Rob Lowe as Sam Seaborn, Janel Moloney as Donna Moss, Dule Hill as Charlie Young, Joshua Malina as Will Bailey, Stockard Channing as Abbey Bartlet, and the very missed John Spencer as Leo McGarry.

The West Wing debuted on NBC in 1999 and it ran for seven seasons ending in 2006, which was over sixteen years ago and still the fans of the series have shown their immense love for the series over and over throughout this time. Fans got a little treat when they saw HBO Max’s A West Wing Special to Benefit When We All Vote which proved to be a big sign that people still miss The West Wing and its unrelenting optimism. So, if you also liked The West Wing and the theme of the series we have prepared a list of similar shows that you should watch, while they are not all as political as The West Wing, they are somewhat similar to the theme and the underlying message of The West Wing.

HBO’s The Newsroom is another one of Aaron Sorkin’s brilliant series that tackles the topic of politics and the ethics of journalism. The Newsroom stars Jeff Daniels as the protagonist of the series, who is a cable news network’s leading anchor. While the series has the same themes compared to Sorkin’s The West Wing, which also deals with political drama but what’s unique about the HBO series is that it blends fiction and reality perfectly. While the cable network which we follow in the series is fictional, almost all of the news that is handled by them is based on recent events. Also like Sorkin’s The West Wing, the heart of The Newsroom is the staff working at the network which includes MacKenzie (Emily Mortimer), Jim (John Gallagher Jr.), Sloan (Olivia Munn), Maggie (Alison Pill), Charlie (Sam Waterston), Don (Thomas Sadoski), Neal (Dev Patel), and Elliot (David Harbour).

Boston Legal is a legal drama series and a direct spin-off of the hit ABC series The Practice. The ABC series is created by a former lawyer and Boston native David E. Kelley and it starred James Spader and William Shatner as the protagonists of the series. Boston Legal follows the exciting daily life of the elite lawyer Alan Shore (Spader) working at the fictional law offices of Crane, Poole & Schmidt. One of the main reasons why people love the series so much is the chemistry between Alan and Denny Crane (Shatner). While the series is not about politics it has its moments about the politics the characters in the series want to represent, and Boston Legal is filled with those moments. The ABC series ran for five seasons from 2004 to 2008.

Madam Secretary is a great series about politics and the people who work in these stressful jobs. The CBS series follows Téa Leoni’s Elizabeth McCord, a previous CIA analyst who gets appointed as the Secretary of State and joins the President for the world to see after the mysterious death of the previous Secretary of State. The series does a commendable job at keeping the series well-written and never letting the characters in the series forget their surroundings. While the series is about the political world and how it’s run, it’s also about a mother of three and a wife who has to do all of these jobs perfectly.

Studio 60 on the Sunset Strip

Studio 60 on the Sunset Strip is another one of Aaron Sorkin’s creations and while it is not as popular as The West Wing or The Newsroom, mostly because it ran for only one season. The NBC series is choke-filled with those Sorkin moments that everyone loves. Studio 60 is about a team of writers, actors, and backstage crew who are responsible for putting on a live sketch comedy series much like SNL on the fictional television network NBS. The series stars the immensely talented Matthew Perry and Bradley Whitford as the protagonists of the series. Studio 60 follows Matt Albie (Perry) and Danny Tripp (Whitford) who return to take over the series as head writer and producer of the series after an unforeseen event shocks the fans of the series within series. Studio 60 also stars Sarah Paulson as Harriet, Amanda Peet as Jordan, Steven Weber as Jack, Timothy Busfield as Cal, Merritt Wever as Suzanne, and Simon Helberg.

Parks and Recreation is a brilliant and beloved comedy series about the government employees working at the Indiana Parks and Recreation Department. NBC’s mockumentary-style comedy series is created by Michael Schur and Greg Daniels who have worked on the wildly popular series The Office (US). Parks and Recreation was a big hit for the network and since then it has enjoyed a whole new fanbase on streaming services. The series follows the infectiously optimistic Leslie Knop (Amy Poehler) as she tries to do everything she can to make her community better. The series also has some of the best and funniest set of characters ever including Ron Swanson (Nick Offerman), April (Aubrey Plaza), Andy (Chris Pratt), Ben (Adam Scott), Chris (Rob Lowe), Tom Haverford (Aziz Ansari), Ann Perkins (Rashida Jones), Jerry (Jim O’Heir), Retta (Donna Meagle), and Jean-Ralphio (Ben Schwartz).

Show Me A Hero

Show Me A Hero is an HBO miniseries based on a nonfiction book of the same name by Lisa Belkin and the story is adapted for television by creators David Simon and Paul Haggis. The HBO series follows a young mayor of Yonkers, New York Nick Wasicsko (Oscar Isaac), who finds himself in a racially divided public that threatens to tear apart the future of the city. Show Me A Hero also stars Catherine Keener, Alfred Molina, Bob Balaban, Peter Riegert, LaTanya Richard-Jackson, Carla Quevedo, and Jon Bernthal.

Yes, Minister is a British political satire sitcom created by Antony Jay and Jonathan Lynn. The comedy series originally aired on BBC2 from 1980 to 1982 and it became one of the most hilarious portrayals of politics on television. The series starred Paul Eddington as the protagonist of the series. The series also launched a spinoff series Yes, Prime Minister four years after the original series ended.