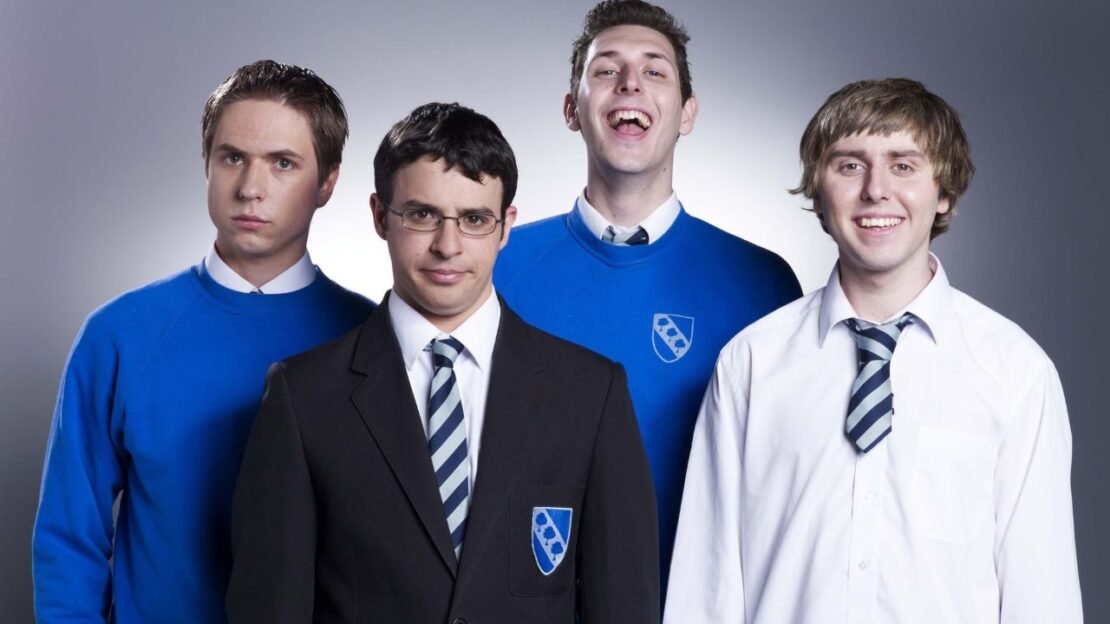 Synopsis: 1914. The Great War rages. Men in their millions have shipped off to join the fight. But in the village of Rittle-on-Sea, three chaps have stayed behind: George (Joe Thomas), a conscientious objector; Cecil (Simon Bird), a reject from the army on health grounds; and then there’s Bert (Jonny Sweet), an amoral philandering scaredy-cat. They couldn’t be more different, but in the eyes of their neighbours they’re all the same: Chickens. So in a world of women, children and the infirm, these fellows have only each other for company and nothing else in common. Every day they live in fear of being labeled as cowards, an argument they’ve already lost in the mere act of still being in England. With every other man abroad, fighting for King and country, can George, Cecil and Bert claw themselves back into the good books of the ladies on the home front?

Chickens is a sitcom about three men on the wrong side of history. It’s about trying to be happy even when it’s embarrassing to be seen to be happy; about starting with the assumption that you’re going to hell and building from there.

Synopsis: The series follows the lives and loves of four best friends – Viva, Holli, Amber and Saz as they journey through their last few years at Greenshoots Academy. All the excitement of their first music festival, romantic entanglements, the school prom and even the prospect that their school may be chosen to feature in a television documentary. What’s more they need to find time to revise for exams, play a bit of football and hang out at Viva’s house eating pizza.

Synopsis: Three twenty-something girls face a quarter-life crisis in their hometown of Leeds. It’s about that post-university struggle to find a job, a place and a boyfriend you actually like.

Synopsis: For the Goodman family, Friday night dinner is just like Sunday lunch: just take two days away, add on an extra course and you’ve pretty much got it. Adam and his brother, Jonny, view Friday night dinner as a necessary annoyance. Necessary because they get fed, and annoying because, well, they have to spend the evening with Mum and Dad.

Synopsis: Meet Dan (Tom Stourton – Horrible Histories) and Hannah (Charlotte Ritchie – Fresh Meat, Call the Midwife) the world s worst brother and sister. Obnoxious, lazy, self-centred, underachieving, incompetent and occasionally depraved, they cause chaos and disaster wherever they go. Through their own selfishness and idiocy, we see them spectacularly wreck the lives of those around them old friends, love interests, family members and the unlikely individuals who just happen to cross their paths. From the producers of The Inbetweeners, created by Keith Akushie (Fresh Meat) and directed by Dam Zeff (Pramface, Inside No.9).

Synopsis: Based in a secondary school in Bristol, this popular drama follows a group of young teachers whose unruly lives and loves are not dissimilar from their adolescent charges. Set as much in the pub as in the classroom, they are continually discovering that life can be much more difficult when school is out.

Synopsis: A warm family comedy about a young boy growing up in a chaotic and creative household in late 1980s Ireland. This semi-autobiographical series is written by and stars Chris O’Dowd as the imaginary friend of 11 year old Martin, the youngest child in the large, loud Moone family.

Synopsis: The Young Offenders is a coming-of-age comedy series following the adventures of loveable rogues Conor and Jock alongside their mother/guardian Mairead as she tries to keep them on the straight and narrow through friendship, loyalty, laughter and lots of mischief. The Series will expand on characters already seen in the smash film of the same name, as we watch the lads encounter love, loss, peer pressure and morality, jam-packed with laughter, but also with a lot of heart.