Netflix’s brilliant animated comedy series Inside Job recently became another canceled Netflix series. Created by Shion Takeuchi the edgy comedy series followed a very dysfunctional team working for a secret organization that hides the biggest conspiracies of the world, the group leader is the anti-social genius, Reagan Ridley. Inside Job premiered with its first season in 2021 and recently concluded its second season after which it was canceled. So, if you miss Inside Job and are hoping to fill its void here are some shows you could watch next.

Synopsis: Luz, a self-assured teenage human girl, accidentally stumbles upon a portal to a magical new world where she befriends a rebellious witch, Eda, and an adorably tiny warrior, King. Despite not having magical abilities, Luz pursues her dream of becoming a witch by serving as Eda’s apprentice at the Owl House and ultimately finds a new family in an unlikely setting.

Also Read: Shows Like ‘Solar Opposites’ To Watch While Waiting For Season 3

Also Read: Shows Like ‘Final Space’ To Watch If You Miss the Series

Synopsis: Steve Maryweather, AKA Agent Mary, was once the Golden Boy of the American Intelligence Agency (AIA), until he came out as gay. Unable to fire him, the Agency sent him off to West Hollywood, to disappear into obscurity. Instead, he assembled a misfit squad of LGBTQ+ geniuses. Joining forces with the expert mechanic Deb, master of drag and disguise Twink, and hacker Stat, together they’re Q-Force. But, after a decade of waiting for their first official mission from The AIA, Mary becomes hell-bent on proving himself to the Agency that turned its back on him, and decides to go rogue with Q-Force. After finding their own case, and solving it on their own terms, they get the reluctant approval of The AIA, and are officially upgraded to Active Secret Agents in the field. But, that approval comes with one major caveat– they must put up with a new member of the squad: straight-guy Agent Buck. 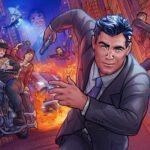