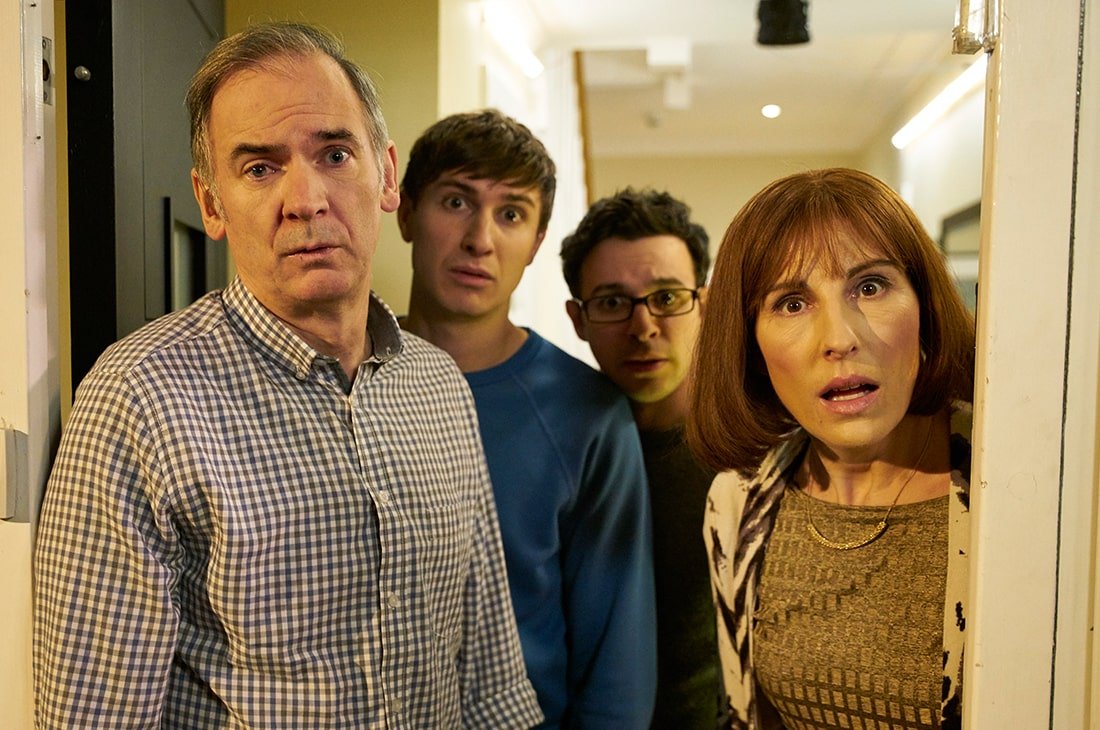 Friday Night Dinner is probably one of the unique comedy series based on some of the most ordinary things. The Channel 4 series follows the Goodman family, and the Goodman siblings Adam and his brother Johnny as they meet their mum and dad on every Friday night for dinner. The Goodman brothers view the Friday night dinner as a necessary annoyance because while they get fed during these dinners but they also have to spend this time with their parents. The series stars comedy legends like Tamsin Greig, Paul Ritter, Simon Bird, Mark Heap, and Tom Rosenthal. Friday Night Dinner premiered in 2011 and ran for six hilarious season-ending its run in 2020. So, if you also miss Friday Night Dinner, here are some more shows you could watch to pass the time.

Synopsis: James Brolin, Dianne Wiest and Colin Hanks head an all-star cast in this hilarious new series that features four short stories each week about the members of one eccentric family!

Synopsis: Outnumbered’ follows the battle of wills between two parents and their three young children, who are seemingly locked into a never-ending contest to see just whose patience will run out first. Testing theories such as not buying broccoli to save money on the weekly shop, and whether or not Jesus should have used his superpowers to combat Herod, the kids ponder the imponderables in the part-improvised comedy that shows how living with kids can provide at turns the funniest and the most cringeworthy experiences available to us all. Many will recognise how the parents (Hugh Dennis and Claire Skinner) are just attempting to raise their kids with the minimum of emotional damage for all concerned.

Synopsis: Animated series “Family Guy” features the adventures of the Griffin family. Endearingly ignorant Peter and his stay-at-home wife Lois reside in Quahog, R.I., and have three kids. Meg, the eldest child, is a social outcast, and teenage Chris is awkward and clueless when it comes to the opposite sex. The youngest, Stewie, is a genius baby bent on killing his mother and destroying the world. The talking dog, Brian, keeps Stewie in check while sipping martinis and sorting through his own life issues.

Synopsis: Written by and starring Miranda Hart (Call the Midwife), this Britcom follows an impossibly clumsy joke shop owner as she stumbles through life and love. Patricia Hodge co-stars as Miranda’s imperious mother, who is desperately trying to marry her off.

Synopsis: FX’s Breeders is an uncompromising comedy that explores the lives of Paul (Martin Freeman) and Ally (Daisy Haggard) as they juggle full-time careers, aging parents, a mortgage and the unenviable curveballs of parenting their young children. When Ally’s estranged father appears on their doorstep, the family essentially takes on a third child – but this one comes with baggage and opinions.