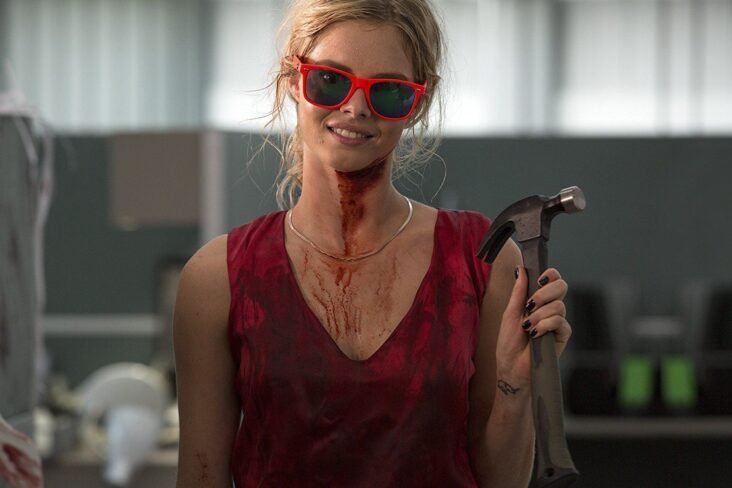 Samara Weaving is one of the most talented rising stars in Hollywood. The Australian actress has continuously been a part of some of the most inventive and entertaining TV shows and movies we have watched. The brilliant actress has shown us her comedy chops in films like Bill and Ted Face the Music and her acting abilities in films like Three Billboards Outside Ebbing, Missouri. So, if you also like Weaving’s performances in many of her films or shows here are the 10 best you could watch.

Synopsis: The Babysitter follows a lonely, 12-year-old boy who falls in love with his hot babysitter only to discover that she’s part of a satanic cult that wants to kill him. Starring: Bella Thorne, Robbie Amell, Samara Weaving, Andrew Bachelor, Hana Mae Lee, and Judah Lewis.

Synopsis: Derek Cho (Steven Yeun, “The Walking Dead”) is having a really bad day. After being unjustly fired from his job, he discovers that the law firm’s building is under quarantine for a mysterious and dangerous virus. Chaos erupts throughout the office as the victims of the disease begin acting out their wildest impulses. Joining forces with a former client (Samara Weaving, “Ash vs Evil Dead”) who has a grudge of her own, Derek savagely fights tooth and nail to get to the executives on the top floor and settle the score once and for all.

Synopsis: Nerdy video game developer (Daniel Radcliffe) is a little too fond of stirring things up on the internet with his caustic, prodding, and antagonizing comments. One night, he makes the mistake of drunkenly dropping an inflammatory barb on a broadcast of Skizm, an illegal death-match fight club streamed live to the public. In response, Riktor (Ned Dennehy), the maniacal mastermind behind the channel, decides to force Miles’ hand (or hands, as it were) and have him join the “fun.” Miles wakes to find heavy pistols bolted into his bones, and learns Nix (Samara Weaving), the trigger-happy star of Skizm, is his first opponent. Gleefully echoing elements of Edgar Wright’s Scott Pilgrim vs. the World, the Purge franchise, and videogames like Mortal Kombat, Guns Akimbo is hilariously dark, viciously violent, and potentially — chillingly — prescient. Director Jason Lei Howden (Deathgasm) foretells of a future that may soon await us: drone-captured live feeds, UFC-like competitions pushed to an extreme, and online streaming platforms used for gladiatorial entertainment all around the world. As Miles navigates the underworld of Skizm, the stakes — and the ratings — have never been higher.

Bill and Ted Face the Music

Synopsis: The stakes are higher than ever for the time-traveling exploits of William “Bill” S. Preston, Esq. (Alex Winter) and Theodore “Ted” Logan (Keanu Reeves). Yet to fulfill their rock and roll destiny, the now middle-aged best friends set out on a new adventure when a visitor from the future warns them that only their song can save life as we know it. Along the way, they will be helped by their daughters, a new batch of historical figures, and a few music legends — to seek the song that will set their world right and bring harmony in the universe.

Synopsis: In “The Valet,” world famous movie star, Olivia (Samara Weaving) faces a PR disaster when a paparazzi snaps a photo of her with her married lover, Vincent (Max Greenfield). The hard-working valet Antonio (Eugenio Derbez) accidentally appears in the same photo and is enlisted to pose as Olivia’s new boyfriend as a cover up. This ruse with Olivia thrusts Antonio into the spotlight and unexpected chaos. In this fish out of water romantic comedy, two worlds and cultures collide as both Olivia and Antonio start to see themselves more clearly than ever before. “The Valet,” directed by Richard Wong and written by Rob Greenberg and Bob Fisher, is the English-language remake of the hit French film.

Synopsis: A new limited series from Ryan Murphy and Ian Brennan, HOLLYWOOD follows a group of aspiring actors and filmmakers in post-World War II Hollywood as they try to make it in Tinseltown — no matter the cost. Each character offers a unique glimpse behind the gilded curtain of Hollywood’s Golden Age, spotlighting the unfair systems and biases across race, gender and sexuality that continue to this day. Provocative and incisive, HOLLYWOOD exposes and examines decades-old power dynamics, and what the entertainment landscape might look like if they had been dismantled.

Synopsis: THREE BILLBOARDS OUTSIDE EBBING, MISSOURI is a darkly comedic drama from Academy Award® winner Martin McDonagh (IN BRUGES). After months have passed without a culprit in her daughter’s murder case, Mildred Hayes (Academy Award® winner Frances McDormand) makes a bold move, commissioning three signs leading into her town with a controversial message directed at William Willoughby (Academy Award® nominee Woody Harrelson), the town’s revered chief of police. When his second-in-command Officer Dixon (Sam Rockwell), an immature mother’s boy with a penchant for violence, gets involved, the battle between Mildred and Ebbing’s law enforcement is only exacerbated.