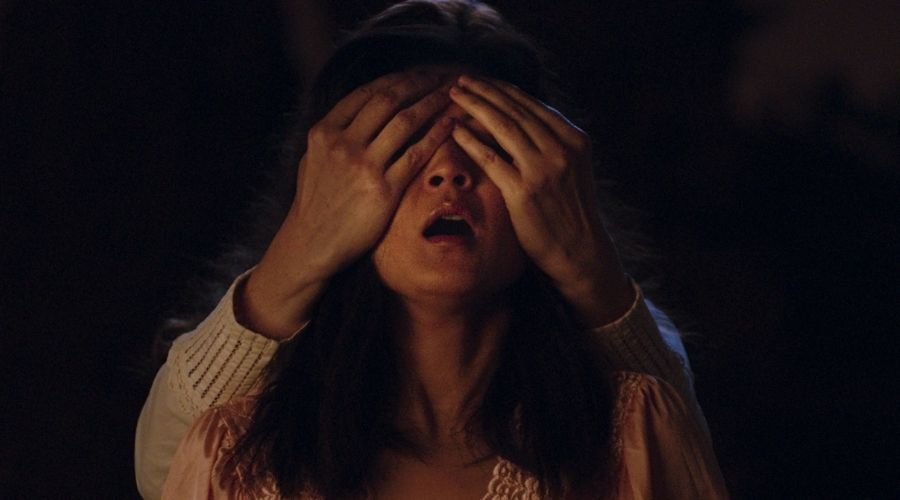 Shudder is nothing if not a goldmine of content, with basically something to watch for everyone, and today we are making a list of the best 15 new movies on Shudder in February 2022 you can watch right now. The movies in this list are not ranked and we have also not included documentaries, because this list only has movies on it.

Synopsis: AMULET follows Tomaz (Secareanu), a former soldier who is left homeless after an accident and takes refuge in the decaying home of Magda (Juri), a lonely young woman in desperate need of help as she cares for her ailing mother. At first hesitant, Magda soon welcomes Tomaz into their lives. But as he gets closer to and begins to fall for Magda, Tomaz notices strange and unexplainable phenomena. Something seems very wrong with the mysterious old woman who never leaves the top floor, and Tomaz begins to suspect that Magda may in fact be a prisoner to her otherworldly bidding.

Synopsis: When film censor Enid (Niamh Algar) discovers an eerie horror video that speaks directly to her sister’s mysterious disappearance, she resolves to unravel the puzzle behind the film and its enigmatic director – a quest that will blur the lines between fiction and reality in terrifying ways.

Synopsis: A team in Alaska is tormented by an unseen evil. After one crewmember is found dead, disorientation slowly claims the sanity of the other team members as each of them succumbs to an unknown fear.

Synopsis: After the death of his mother, Lucas, a loner who lives in a rundown home with his brother Tom, regularly seeks solace in the nearby woods. With his only “friends” being a group of female bullies, he keeps to himself most of the time. But, after a strange encounter with an inhuman monster, Lucas begins to withdraw from others. When the two reach a tentative trust, a bizarre friendship is born, and Lucas is swept up in a series of primal adventures.

Synopsis: Gillian (Gillian Wallace Horvat) is one of those many struggling filmmakers in L.A. who just can’t seem to get the money for their first feature. Feeling like her friends and her partner (Keith Poulson) are losing faith in her abilities, she decides to resurrect her abandoned documentary based on a pseudo-compliment she once received that she would make a good murderer. But while she documents what makes “the perfect murder” a hitherto unseen dark side of Gillian emerges and grows. Furthermore the problem with being a successful serial killer, she discovers, is keeping the whole thing stealth, denying her the recognition that she craves… and that unhinges her even more. After accidentally-ish killing her best friend (Chase Williamson), Gillian goes on a killing spree culminating with a final bloody act that nobody would dare deny her credit for. Written, directed, and starring Wallace Horvat as a warped version of herself, I BLAME SOCIETY is razor-sharp satire of the pitfalls of post-#MeToo culture in Los Angeles. At once hilarious and genuinely disturbing, Horvat’s film delves into the psyche of a young woman trying to believe in her dreams and herself… and facing the darkness that lurks inside in this macabre Cinderella story.

Synopsis: Knocking is a twisty, claustrophobic and gut-wrenching thriller streaked with horror, from director and Cannes Palme D’Or winner Frida Kempff, with a fierce and soul-baring central performance from Cecilia Milocco. A woman (Molly) who has just experienced a traumatic incident is unnerved by a haunting knocking sound from upstairs in her new apartment building. As the noises become more desperate and increasingly sound like cries for help, she confronts her neighbours, but it seems no one else can hear them. In an unsettling quest for truth, Molly soon realises that no one believes her, and begins to question if she even believes herself – a realisation that is perhaps even more chilling.

Synopsis:Evan (Lou Taylor Pucci, Evil Dead, Thumbsucker) is a young American fleeing to Europe to escape his past. While backpacking along the Italian coast, everything changes during a stop at an idyllic Italian village, where he meets and instantly connects with the enchanting and mysterious Louise. A flirtatious romance begins to bloom between the two — however, Evan soon realizes that Louise has been harboring a monstrous, primordial secret that puts both their relationship and their lives in jeopardy. A beautiful, fluid genre-bender from directors Justin Benson and Aaron Moorhead (Resolution), Spring is an unforgettable romance of mythical proportions.

Synopsis: Following his parents’ separation, a rebellious teenage boy, Ben, is sent to live with his father for the summer and work at the local marina in order to gain some form of discipline. The idyllic tourist town offers little solace for him, however, as he is forced to deal with the local, privileged teens and his father’s new girlfriend. Ben’s problems grow increasingly disturbing when he makes a chilling discovery about the family renting the house next door. A malevolent spirit from the woods has taken ahold of the parents and starts playing a sinister game of house, preying upon the children and wiping away any trace of their existence. Ben’s suspicions of the supernatural horrors go unheeded and he launches a perilous crusade in order to put an end to the skin-walking witch’s reign of terror. Chilling and suspenseful, THE WRETCHED offers a modern update to the retro young hero’s mission like that of The Goonies, and promises to make viewers wary of every dark corner they encounter after witnessing its terrifying tale.

The Live in the Grey

Synopsis: While investigating a child abuse case, a young social worker discovers that a supernatural entity is tormenting the family. To save the parents from losing custody of their child, she must confront her fears and use her clairvoyance to stop the malevolent force. Written and directed by brothers Burlee and Abel Vang (The Tiger’s Child.) They Live in the Grey stars Michelle Krusiec (Hollywood), Ken Kirby (Good Trouble, Dynasty), Ellen Wroe (For All Mankind, Shameless), Madelyn Grace (Don’t Breathe 2).

Synopsis: Elijah Wood is a man in his thirties who receives an invitation to a remote cabin for a visit with his father after a lifetime of estrangement. What he gets is much more than he ever expected!

Synopsis: Two troublesome schoolboys awaken to find themselves tied up in a room, where a teacher has decided to teach them a deadly lesson.

Synopsis: 16-year-old Izzy leads an isolated life on a lonely mountaintop. All she’s learned is from her protective mom and the wilderness that swallows them. Izzy dreams of a live gig, but her mother thinks she’s too sick and mustn’t be around others. Questioning her illness and starved for companionship, Izzy sneaks down the mountain where she befriends brazen Amber. Izzy is in heaven until a cruel drinking game with a live worm unleashes a new kind of hunger.

Synopsis: Due to her controversial methods, young doctor Tatiana Yurievna (Oksana Akinshina) is on the precipice of losing her medical license. Her career may not be over, though. After she’s recruited by the military, Tatiana is brought to a secure science research facility to assess a very special case, that of Konstantin Sergeyevich (Pyotr Fyodorov), a cosmonaut who survived a mysterious space accident and has returned to Earth with a unique condition: there’s something living inside of him that only shows itself late at night. The military has nefarious plans for it. Tatiana wants to stop it from killing Konstantin. And the creature itself thrives on destruction.

Synopsis: From the innovative minds that brought you last year’s V/H/S comes V/H/S/2, an all-new anthology of dread, madness, and gore. Searching for a missing student, two private investigators break into his abandoned house and find a collection of mysterious VHS tapes. In viewing the horrific contents of each cassette, they realize there may be terrifying motives behind the student’s disappearance.

This concludes the list of the best 15 new movies on Shudder in February 2022. So, if you have watched them tell us in the comments and we will make a new list for you, and if you haven’t what are you waiting for.