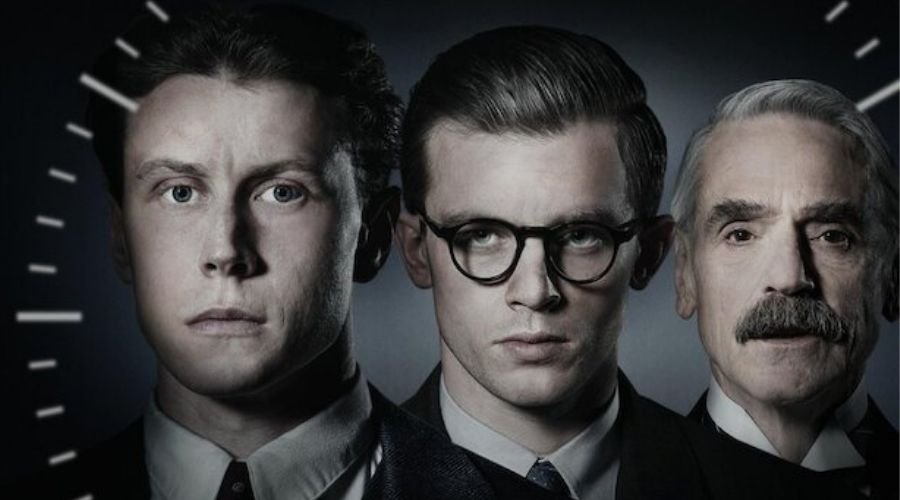 Netflix’s new film Munich: The Edge of War is a new thriller film directed by Christian Schwochow. Set in 1938 the film revolves around the peace agreement that took place between British Prime Minister Neville Chamberlain and Adolf Hitler. The film is full of political tension and terrifying revelations, but the sad news is only two-hour-long, so to fill that thriller film’s shaped hole in your mind we made a list of the best 10 films like Munich: The Edge of War.

Synopsis: A dramatic thriller set against the backdrop of a series of historic events, BRIDGE OF SPIES tells the story of James Donovan (Hanks), a Brooklyn lawyer who finds himself thrust into the centre of the Cold War when the CIA sends him on the near-impossible task to negotiate the release of a captured American U-2 pilot. Screenwriters Matt Charman and Ethan Coen & Joel Coen have woven this remarkable experience in Donovan’s life into a story inspired by true events that captures the essence of a man who risked everything and vividly brings his personal journey to life.

Synopsis: From the Tony Award(R)-winning play comes this riveting true story of the 1993 Oslo Peace Accords. Starring Ruth Wilson and Andrew Scott, the film follows the secret back-channel talks, unlikely friendships and quiet heroics of a small but committed group of Israelis, Palestinians and one Norwegian couple that led to a historic peace agreement between Israel and Palestine.

The Man With The Iron Heart

Synopsis: Prague, 1942. The Third Reich is at its zenith, controlling most of Europe. Reinhard Heydrich (Jason Clarke, Zero Dark Thirty), aided by his wife Lina (Rosamund Pike, Gone Girl), has risen to the top of the Nazi Party as head of the SS, the Gestapo, and the architect of the “Final Solution”. His brutal and oppressive rule of occupied Czechoslovakia leads to Hitler dubbing him “The Man with the Iron Heart”. However, a small group of Czechoslovak Resistance fighters led by Jan Kubiš (Jack O’Connell, Starred Up) and Jozef Gabčík, (Jack Reynor, Free Fire) seek to stop the unstoppable and plan to assassinate Heydrich, making him the highest-ranking Nazi officer ever to be killed during World War II. Based on Laurent Binet’s bestselling book HHhH, The Man With The Iron Heart and its all-star cast tell the incredible true story of how the brave men and women of the Resistance sacrificed everything in the name of freedom.

Synopsis: THE COURIER is a true-life spy thriller, the story of an unassuming British businessman Greville Wynne (Benedict Cumberbatch) recruited into one of the greatest international conflicts in history. At the behest of the UK’s MI-6 and a CIA operative (Rachel Brosnahan), he forms a covert, dangerous partnership with Soviet officer Oleg Penkovsky (Merab Ninidze) in an effort to provide crucial intelligence needed to prevent a nuclear confrontation and defuse the Cuban Missile Crisis.

The Day of the Jackal

Synopsis: Academy Award® winner Fred Zinnemann directs this gripping political thriller based on Frederick Forsyth’s bestselling novel. An underground organization wants French President General Charles de Gaulle dead, and they turn to a ruthless assassin known only as “The Jackal” to pull the trigger. The tension mounts as the would-be killer’s methodical preparations are paralleled by the efforts of French and British police to prevent an event that would stun the world. Get ready for international intrigue and non-stop suspense in The Day of the Jackal.

Synopsis: This thrilling true story follows the 1960 covert mission of legendary Mossad agent Peter Malkin as he infiltrates Argentina and captures Adolf Eichmann, the Nazi officer who masterminded the transportation logistics that brought millions of innocent Jews to their deaths in concentration camps.

Synopsis: Academy Award® nominee Gary Oldman gives a “towering performance” (Richard Lawson, Vanity Fair) in acclaimed director Joe Wright’s soaring drama Darkest Hour. As Hitler’s forces storm across the European landscape and close in on the United Kingdom, Winston Churchill (Oldman) is elected the new Prime Minister. With his party questioning his every move, and King George VI (Ben Mendelsohn) skeptical of his new political leader, it is up to Churchill to lead his nation and protect them from the most dangerous threat ever seen. Also starring Academy Award® nominee Kristin Scott Thomas and Lily James, Darkest Hour is a powerful, inspirational drama.

Synopsis: The true story of a plot masterminded by German army officers to assassinate Adolf Hitler – with a bomb – and take over the government during World War II. With Bill Nighy, directed by Bryan Singer (X-Men).

The Catcher Was a Spy

Synopsis: Moe Berg, a 15-year baseball veteran, joins the war effort as a spy to beat Nazi Germany in the race to build the first atomic bomb. In 1936, Berg is playing for the Boston Red Sox near the end of a long if undistinguished pro career. On a goodwill baseball exhibition tour of Japan, Berg sneaks onto the roof of a Tokyo hospital to covertly film Tokyo’s harbor and Navy shipyards. The Office of Strategic Services Chief to whom he presents the film is impressed by Berg’s enterprise, as well as the extensive language skills that Berg has picked up at Princeton and elsewhere, and Berg is hired. Werner Heisenberg, who won the Nobel Prize in 1932 for pioneering quantum physics, is now in charge of the Nazis’ attempts to create an atom bomb. If he succeeds, the Germans could win the war. Berg is smuggled into Italy and then Switzerland, with the task to discover if Heisenberg is anywhere near that goal. If so, it will fall to Berg to assassinate the brilliant physicist.