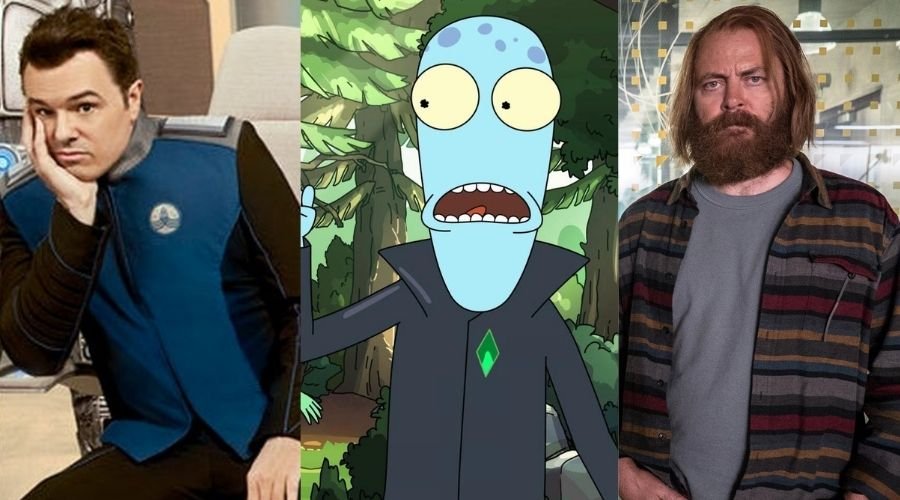 Science-fiction is one of the best genres in all of cinema. Sci-fi movies show what we can only imagine, and they blend many genres like action, romance, and mystery in them and make a very great cinematic experience. So, we made a list of the best sci-fi TV shows on Hulu you can watch right now.

Synopsis: Future Man stars Josh Hutcherson (The Hunger Games) as “Josh Futturman,” a janitor by day/gamer by night who is recruited by mysterious visitors to travel through time in order to prevent the extinction of humanity.

Synopsis: In Devs, an FX limited series, a young software engineer, Lily Chan, investigates the secret development division of her employer, a cutting-edge tech company based in Silicon Valley, which she believes is behind the murder of her boyfriend. Devs stars Sonoya Mizuno as “Lily Chan;” Nick Offerman as “Forest,” the CEO of Amaya; Jin Ha as “Jamie,” Lily’s former boyfriend; Karl Glusman as “Sergei,” Lily’s boyfriend; Zach Grenier as “Kenton,” Amaya’s Head of Security; Stephen McKinley Henderson as “Stewart,” one of the top minds working in Amaya’s secret development division; Cailee Spaeny as the young, brilliant “Lyndon;” and Alison Pill as “Katie,” the gifted quantum physicist and second in command at Amaya. Alex Garland writes, directs and serves as executive producer of Devs along with Andrew Macdonald and Allon Reich of DNA TV, Scott Rudin, Eli Bush and Garrett Basch. The series is produced by FX Productions.

Synopsis: After serving as a British Army nurse in World War II, Claire Randall is enjoying a second honeymoon in Scotland with husband Frank, an MI6 officer looking forward to a new career as an Oxford historian. Suddenly, Claire is transported to 1743 and into a mysterious world where her freedom and life are threatened. To survive, she marries Jamie Fraser, a strapping Scots warrior with a complicated past and a disarming sense of humor. A passionate relationship ensues, and Claire is caught between two vastly different men in two inharmonious lives. “Outlander” is adapted from the best-selling books by Diana Gabaldon.

Synopsis: After a meteor shower bursts from the heavens, raining destruction on the unsuspecting citizens of Smallville, years pass, and the healing process leaves the town’s inhabitants with scars and secrets. From the ashes of tragedy, a popular yet awkward teen attempts to decipher the meaning of his life and his clouded past.

Synopsis: Flynn Carsen (Noah Wyle: ER, Falling Skies) may appear to be an ordinary librarian working for the world-famous Metropolitan Library, but beneath the public library lies the centuries-old headquarters of scholars and adventurers who investigate the bizarre, collect dangerous artifacts and save the world from supernatural threats. This is The Library,and Flynn is The Librarian.

Synopsis: From Philip Pullman’s epic “His Dark Materials” fantasy trilogy (which consists of the books “The Golden Compass,” “The Subtle Knife,” and “The Amber Spyglass”) comes this compelling HBO series that follows young orphan Lyra (Dafne Keen) on an incredible adventure into a parallel world where a human’s soul exists outside one’s body–in the form of a talking animal.

Synopsis: Now, with the Omnitrix, Ben can transform into any of 10 alien heroes — each with their own special powers. And Ben is going to need all the powers he can get if he is going to save the world from Vilgax and his evil alien forces.

Synopsis: Family adventure series THE GIFTED, from 20th Century Fox Television in association with Marvel Television, tells the story of a suburban couple whose ordinary lives are rocked by the sudden discovery that their children possess mutant powers. Forced to go on the run from a hostile government, the family joins up with an underground network of mutants and must fight to survive.

Synopsis: The 23rd century adventures of Captain James T. Kirk and the U.S.S. Enterprise (NCC-1701), a powerful interstellar spacecraft dispatched by Earth-based Starfleet Command to explore the galaxy. Kirk commands a crew of 430 men and women aboard his starship, which can travel at speeds surpassing the speed of light. Kirk’s five-year mission—and his mandate from Starfleet—is to seek out new life and new civilizations, and to boldly go where no man has gone before.

Synopsis: The Crew of a starship travel through outer space after Earth’s resources have diminished and forced us to look elsewhere in 2517. Captain Malcolm “Mal” Reynolds (Nathan Fillion) steers his bandit-crew through anything to keep them alive, and keep flying.

Synopsis: Every teenager thinks their parents are evil. What if you found out they actually were? Marvel’s Runaways is the story of six diverse teenagers who can barely stand each other but who must unite against a common foe – their parents.

Synopsis: People of Earth is an American comedy television series created by David Jenkins about a support group for alien abductees.

Synopsis: This high-octane drama follows an unlikely trio who travel through time to battle a master criminal intent on altering the fabric of human history with potentially catastrophic results.

This concludes the list of the best sci-fi TV shows on Hulu you can watch right now. So, if you have watched them tell us in the comments and we will make a new list for you, and if you haven’t what are you waiting for.