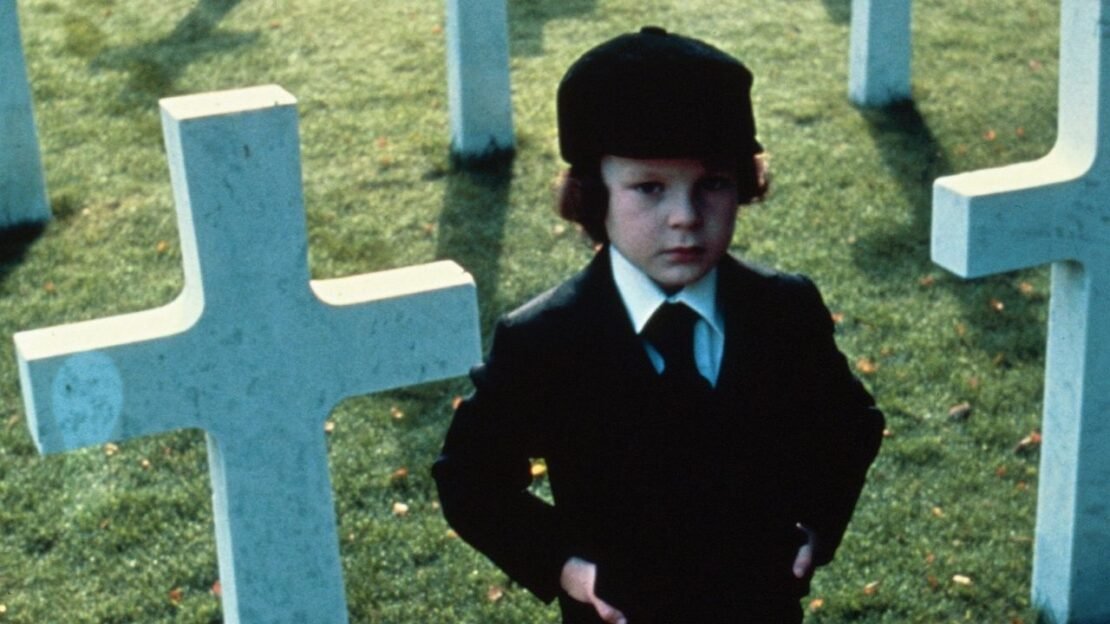 Children are almost always innocent, pure, and good characters in films, but when you see a child doing something truly atrocious deeds it is really horrifying and that’s why these movies are all brilliant horror films that feature evil children. Using a child in a film as an antagonist is one of the best ways to subvert expectations, because nobody sees it coming and when the film is done it really makes an impact on the mind of the audience. So, if you want to watch some horror with absolutely thrilling stories, here are the 7 best movies featuring evil children.

7. Children of the Corn

Synopsis: A young couple (Linda Hamilton, Terminator 2, and Peter Horton, thirtysomething) find themselves stranded in the rural town of Gatlin, Nebraska, where they encounter a mysterious religious sect of children. The horror grows to a blood-curdling climax as the two new visitors learn the horrifying secret behind the prospering corn fields. Based on the classic short story by Stephen King.

Synopsis: Evil resides in an unexpected place in this gripping, suspense-filled drama. Macaulay Culkin stars as Henry, an angelic-looking boy who seems loving and loyal to his parents, sister and friends. Only his cousin Mark (Elijah Wood) sees what lurks behind Henry’s smile – secret thoughts and a love of deadly games. But when Mark tries to warn Henry’s family, they won’t believe him, leaving the terrified youngster alone to battle his jealous, menacing cousin.

Synopsis: The tragic loss of their unborn child has devastated Kate (Vera Farmiga) and John (Peter Sarsgaard), taking a toll on both their marriage and Kate’s fragile psyche as she is plagued by nightmares and haunted by demons from her past. Struggling to regain some semblance of normalcy in their lives, the couple decides to adopt another child. At the local orphanage, both John and Kate find themselves strangely drawn to a young girl named Esther (Isabelle Fuhrman)…but Esther is not what she appears to be and, concerned for the safety of her family, Kate tries to get John and others to see past Esther’s sweet facade. But her warnings go unheeded until it may be too late…for everyone.

Synopsis: In the heat of the summer lays a lonesome house in the countryside where nine year old twin brothers await their mother’s return. When she comes home, bandaged after cosmetic surgery, nothing is like before and the children start to doubt whether this woman is actually who she says she is. What ensues is a terrifying observational struggle with fatal consequences on par with THE SHINING and DEAD RINGERS.

3. We Need to Talk About Kevin

Synopsis: Eva puts her ambitions and career aside to give birth to Kevin. The relationship between mother and son is difficult from the very first years. When Kevin is 15, he does something irrational and unforgivable in the eyes of the entire community. Eva grapples with her own feelings of grief and responsibility. Did she ever love her son? And how much of what Kevin did was her fault?

Synopsis: William Friedkin directs one of the most horrifying movies ever made. When a charming 12-year-old girl takes on the characteristics and voices of others, doctors say there is nothing they can do. As people begin to die, the girl’s mother realizes her daughter has been possessed by the devil–and that her daughter’s only possible hope lies with two priests and the ancient rite of demonic exorcism.

Synopsis: When his child is stillborn, an American diplomat (Academy Award® Winner Gregory Peck*) is convinced to exchange the dead baby for a living one, in order to spare his wife’s feelings. But as the child grows, a series of gruesome “accidental” murders begins to occur, and the horrifying identity of the child becomes clear in this timeless, bone-chilling thriller set to Jerry Goldsmith’s Oscar®-Winning Original Score.