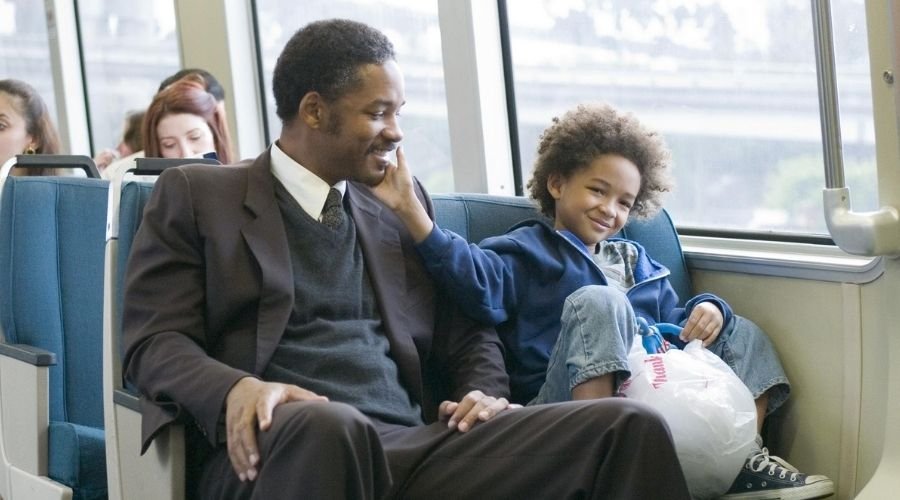 America is the land of freedom, where all men and women can create and live the life they want. The American Dream is the term that has given hope to many people who believe that they can be successful and live a luxurious life. Many immigrants travel from far away lands to the United States of America because of the American Dream, because they think that America is the state of freedom and financial promise if you work hard enough you can live a great life without any barriers. So, here are the 10 best movies that represent the American Dream in its true form.

Synopsis: The uniquely imaginative Baz Luhrmann (Moulin Rouge!, Australia) tackles F. Scott Fitzgerald’s landmark novel, The Great Gatsby, with blockbuster star Leonardo DiCaprio in the title role. Spider-Man’s Tobey Maguire stars as the Fitzgerald-like would-be writer Nick Carraway who arrives in New York in 1922, an era of loose morals, glittering jazz and bootleg kings. Chasing his own American Dream, Nick encounters the mysterious millionaire Gatsby and his bewitching cousin Daisy. Soon, Nick is drawn into the captivating world of the super-rich, their illusions, loves and deceits. Bearing witness to this new world, Nick pens a tale of impossible love, incorruptible dreams and unforgettable tragedy — mirroring our own times and struggles.​

Synopsis: John Steinbeck’s classic 1937 novel is given new life by director Gary Sinise who also plays the part of George Milton, a laborer who has thrown in his lot with a hulking giant, Lennie Small (John Malkovich), whose brain failed to develop with his body. George has become Lennie’s protector. Although retarded, Lennie is a willing, strong worker, and between them they expect to earn enough money to buy their own small piece of land. Lennie’s strength is also his curse. He has a childlike attachment to small animals, but often crushes them to death. And women, to Lennie, are like soft, small and gentle animals. The tragedy that will emerge from this fact will involve an exploited and misused woman (Sherilyn Fenn).

8. The Pursuit of Happyness

Synopsis: Will Smith stars in this moving tale inspired by the true story of Chris Gardner, a San Francisco salesman struggling to build a future for himself and his 5-year-old son Christopher (Jaden Smith). When his girlfriend Linda (Thandie Newton) walks out, Chris is left to raise Christopher (Jaden Smith) on his own. Chris’ determination finally pays off when he lands an unpaid internship in a brutally competitive stockbroker-training program, where only one in twenty interns will make the cut. But without a salary, Chris and his son are evicted from their apartment and are forced to sleep on the streets, in homeless shelters and even behind the locked doors of a metro station bathroom. With self-confidence and the love and trust of his son, Chris Gardner rises above his obstacles to become a Wall Street legend.

Synopsis: Tobey Maguire, Academy Award and Golden Globe-winner Reese Witherspoon, Academy Award-nominee and Emmy-winner William H. Macy and Golden Globe-nominee Jeff Daniels star in this modern day fairy tale where an entire fictional town is granted a chance to experience the comedies and dangers of real life when two late 20th Century teenagers accidentally bring living color to a mysterious suburb trapped in a black-and-white ’50s utopia–and set off a revolution. This film was written, produced, and directed by Academy Award-nominee Gary Ross. for some thematic elements emphasizing sexuality, and for language.

Synopsis: Mr. Smith Goes to Washington is a political-drama film directed by Frank Capra, and it stars James Stewart, Jean Arthur, Claude Rains in lead roles. The film follows young and idealistic Jefferson Smith, who gets appointed to the United States Senate and takes mentorship from Senator Joseph Paine, who is corrupt, unlike his public image which is very clean. Paine tries to discredit Mr. Smith when he becomes involved in a corruption scandal on the Senate floor.

Synopsis: Tensions and temperatures rise over the course of an afternoon recording session in 1920s Chicago as a band of musicians await trailblazing performer, the legendary “Mother of the Blues,” Ma Rainey (Academy Award® winner Viola Davis). Late to the session, the fearless, fiery Ma engages in a battle of wills with her white manager and producer over control of her music. As the band waits in the studio’s claustrophobic rehearsal room, ambitious cornet player Levee (Chadwick Boseman) — who has an eye for Ma’s girlfriend and is determined to stake his own claim on the music industry — spurs his fellow musicians into an eruption of stories revealing truths that will forever change the course of their lives. Adapted from two-time Pulitzer Prize winner August Wilson’s play, MA RAINEY’S BLACK BOTTOM celebrates the transformative power of the blues and the artists who refuse to let society’s prejudices dictate their worth. Directed by George C. Wolfe and adapted for the screen by Ruben Santiago-Hudson, the film is produced by Fences Oscar® nominees Denzel Washington and Todd Black. Colman Domingo, Glynn Turman, Michael Potts, Taylour Paige, Dusan Brown, Jeremy Shamos and Jonny Coyne co-star alongside Grammy® winner Branford Marsalis’ score.

Synopsis: Stupid is as stupid does, says Forrest Gump (played by Tom Hanks in an Oscar-winning performance) as he discusses his relative level of intelligence with a stranger while waiting for a bus. Despite his sub-normal IQ, Gump leads a truly charmed life, with a ringside seat for many of the most memorable events of the second half of the 20th century. Entirely without trying, Forrest teaches Elvis Presley to dance, becomes a football star, meets John F. Kennedy, serves with honor in Vietnam, meets Lyndon Johnson, speaks at an anti-war rally at the Washington Monument, hangs out with the Yippies, defeats the Chinese national team in table tennis, meets Richard Nixon, discovers the break-in at the Watergate, opens a profitable shrimping business, becomes an original investor in Apple Computers, and decides to run back and forth across the country for several years. Meanwhile, as the remarkable parade of his life goes by, Forrest never forgets Jenny (Robin Wright Penn), the girl he loved as a boy, who makes her own journey through the turbulence of the 1960s and 1970s that is far more troubled than the path Forrest happens upon. Featured alongside Tom Hanks are Sally Field as Forrest’s mother; Gary Sinise as his commanding officer in Vietnam; Mykelti Williamson as his ill-fated Army buddy who is familiar with every recipe that involves shrimp; and the special effects artists whose digital magic place Forrest amidst a remarkable array of historical events and people.

Synopsis: Synopsis: 1940. Alone at his fantastic estate known as Xanadu, 70-year-old Charles Foster Kane dies, uttering only the single word Rosebud. So ends the odyssey of a life … and begins a fabulous tale of the rise to wealth and power–and ultimate fall–of a complex man: A boy abandoned by his parents inherits a fortune, builds a global newspaper empire and aspires to become President of the United States, but he loses everything over an affair with an untalented nightclub singer. This fascinating story unfolds through the eyes of the people important to the tycoon–each showing a different aspect of Citizen Kane. Frequently regarded as the best American film ever made; winner of an Academy Award for Best Writing, Original Screenplay; and nominated for an additional eight Academy Awards including Best Picture, Best Director and Best Actor.