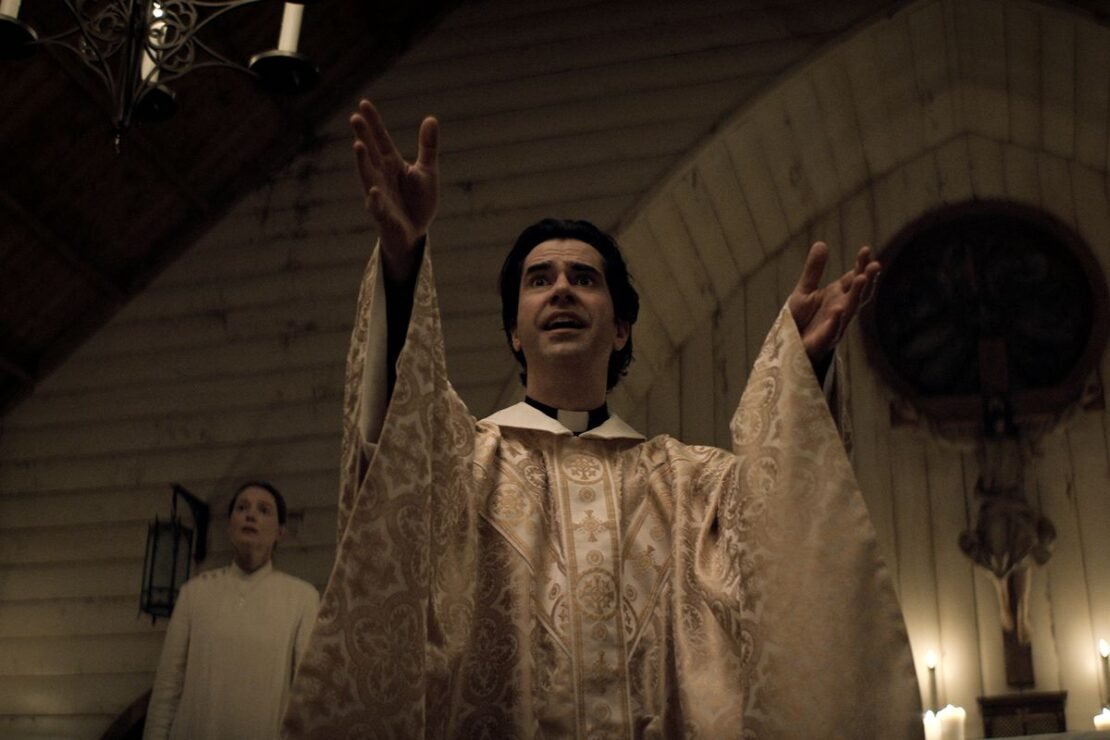 Netflix’s latest horror limited series Midnight Mass is on its surface about different types of Good vs different types of Evil, but beyond all that there is an allegory about the dangers that come with the permeation of self-righteousness in all its many forms. Midnight Mass is created by Mike Flanagan (The Haunting of Hill House, The Haunting of Bly Manor) and it revolves around a charismatic young pastor who has just moved into a tight-knit community and brings glorious miracles and ominous mystery with him. So, here are the best 10 movies like Midnight Mass you can watch after finishing the limited series on Netflix.

Synopsis: In Knockemstiff, Ohio and its neighboring backwoods, sinister characters — an unholy preacher (Robert Pattinson), twisted couple (Jason Clarke and Riley Keough), and crooked sheriff (Sebastian Stan) — converge around young Arvin Russell (Tom Holland) as he fights the evil forces that threaten him and his family. Spanning the time between World War II and the Vietnam war, director Antonio Campos’ THE DEVIL ALL THE TIME renders a seductive and horrific landscape that pits the just against the corrupted.

Synopsis: Inspired by true events, “The Rite” follows skeptical seminary student Michael Kovak (Colin O’Donoghue), who reluctantly attends exorcism school at the Vatican. While in Rome, he meets an unorthodox priest, Father Lucas (Anthony Hopkins), who introduces him to the darker side of his faith.

Synopsis: Charley Brewster (William Ragsdale) is a normal teenager who lives in the town of Rancho Corvalis. Devoted to his girlfriend Amy (Amanda Bearse) and his red ’68 Mustang, virtually everything is normal about Charley except for one thing: he’s pretty sure a vampire has moved into the house next door. But Charley is having a hard time getting anyone to believe him. His mom offers Valium and cocoa, Amy thinks he’s been watching too many scary movies, his buddy Evil Ed (Stephen Geoffreys) recommends garlic and crucifixes, while Peter Vincent (Roddy McDowall), the former horror-film star to whom Charley turns for help, views the poor kid’s delusion as a way to make some easy money. Only his suave and sinister neighbor, Jerry Dandrige (Chris Sarandon), takes Charley seriously. And Jerry’s trying to make sure Charley stops telling stories. Permanently.

Synopsis: This effects-heavy installment is the inevitable sequel to one of the more effectively spooky and financially successful horror films of the ’80s. The Freeling family is trying to grapple with the devastation wrought by the ghosts and ghouls that destroyed their lives. Steve (Craig T. Nelson), Diane (JoBeth Williams), and their kids, Carol Anne (Heather O’Rourke) and Robbie (Oliver Robins), have been reduced to living in the home of Diane’s mother, Jess (Geraldine Fitzgerald) because the insurance company refuses to believe what happened to their house. The Freelings are unfortunately unable to escape patches of unholy ground living in a house that is just as haunted as the last. The evil spirit of the mad cult leader Kane (Julian Beck) has returned in an effort to kidnap Carol Anne. After realizing what’s happening, the Freelings call upon the psychic medium Tangina Barrons (Zelda Rubinstein) for help, and are aided by a benevolent Native American spiritualist, Taylor (Will Sampson).

Synopsis: A contemporary and blood-chilling take on the gothic legend, horror master John Carpenter’s Vampires stars James Woods as the ultimate vampire slayer on his most dangerous mission ever.

Synopsis: The story of a young couple who are expecting their first child. Like most first-time mothers, Rosemary experiences confusion. Her husband, an ambitious but unsuccessful actor, makes a pact with the devil that promises to send his career skyward.

Synopsis: This dramatic documentary drama tracks the final build up to a horrific doomsday: the infamous mass murder and suicides of Jim Jones’ cult followers in the jungles of Guyana, where over 900 men, women, and children died on November 18, 1978.

Synopsis: A sprawling epic of family, faith, power and oil, THERE WILL BE BLOOD is set on the incendiary frontier of California’s turn-of-the-century petroleum boom. The story chronicles the life and times of one Daniel Plainview (Daniel Day-Lewis), who transforms himself from a down-and-out silver miner raising a son on his own into a self-made oil tycoon.

Synopsis: The director of Old Boy delivers a wicked love story that takes classic vampire lore to twisted new heights. A priest fights his vampire nature until an affair unleashes his darkest desires.

Synopsis: An expressionist classic about a corrupt preacher who holds nefarious motives for marrying an unsuspecting widow. Her terrified young children, soon become savvy to this strangers act.

This concludes the list of the best 10 movies like Midnight Mass series you can watch right now. If you have watched them all tell us in the comments we will make a new list for you and if you haven’t, What are you waiting for?